It is one of precision variable resistor and it is used for precision measurement other than the volume. It is essentially a voltage divider used for measuring electric voltage by shaft’s mechanical movement. Basic connection is 3 wires, input(+), GND, Output(-). It is used many kinds of applications as an analog position sensor. In recent years, contactless potentiometers have been developed which is applicated Hall-IC sensor.

It is our product line Trademark which is the Contactless Potentiometer using Hall-IC. Its label is color of orange. It cannot be measured by resistance value because of built-in amplifier. Hall-IC is the semiconductor element so that total resistance value choice nor measuring resistance value are not available like contact type potentiometer.

It is our product line Trademark which is the Contactless Potentiometer using Magneto-Resistive Element. Its label is color of blue. Resistance values are not selectable because it is fixed by element size.

It is our product line Trademark which is the Potentiometer using Conductive Plastic Element. Its housing or label are color of green. It are needed to be selected total resistance value.

It is the Encoder using Magnet and Magnetoelectric Conversion Element.

A force which rotates shaft. Standardly, it is value of running torque.

A force which move shaft of the linear potentiometer.

It is maximum load to vertical direction of the shaft of angle sensor. Catalog specification is based on laboratory condition. If the shaft are loaded force excessively, it may cause of failure. If you would like to load to the shaft, please contact us. 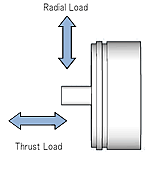 It is maximum push / pull force to the shaft of angle sensor. Catalog specification is based on laboratory condition. If the shaft are loaded force excessively, it may cause of failure. If you would like to load to the shaft, please contact us.

L1 is mounting side and l2 is opposite. L1 is the length from mounting surface to shaft end. (Note: It is not shaft length only.) For special shaft length, please contact us.

Defined angle(°) / stroke (mm) of each product which can be got output change characteristic.

Defined angle(°) / stroke (mm) of each product which can be got output. It include the short-circuited portion where output is stable. 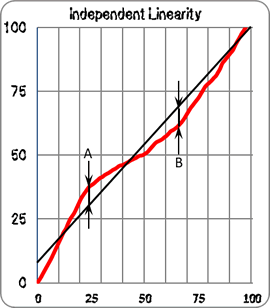 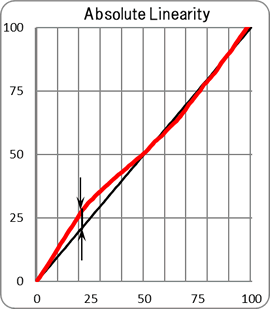 It is a definition by MIDORI which is used for the Tilt Angle type.The mechanical angle 0 ° (horizontal) is used as the electrical midpoint (base point) for both ends.Based on the output voltage ratio at an angle of 0 ° (position in the horizontal direction) as the based line, the tilt angle of the based line is changed so that the output error at the points A and B which become the maximum error equally is minimized. The maximum with respect to this based line the output error is expressed as a percentage. 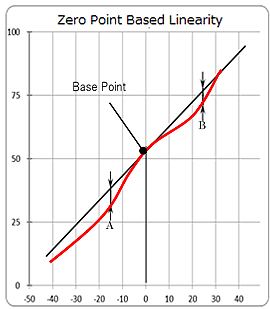 It is range of guaranteed linearity within effective electrical travel.

It refers to the performance that current does not leak in the electric path through which current flows. Represent the resistance value to which the voltage applied to the potentiometer does not leak trough the attached the case or shaft. In addition, some of MIDORI products contain static electricity or noise countermeasure parts (such as feedthrough capacitor, variable resistor, etc.), so some products are not insulated. However, these products have low power input voltage so even if there is current leakage, it is minute and there is no harm to the human body.

It is the voltage that can be applied without causing dielectric breakdown in the specified time. If it is applied a voltage to the case or shaft more than value of dielectric strength, the insulation state is destroyed and current flows.

It is angle/stroke conversion of the influence on output in the specified temperature range.

It is the resistor which is connected to the output line. It is the impedance (resistance value) of the device which receives output of the potentiometer. It is also called Load impedance.

It is output error that occurs when the shaft is rotated/slid and reversed and mechanically returned to its original position. By spring flexibility of the wiper, spring board, damper oil (in tilt angle type) and magnetic hysteresis due to the influence of residual magnetism of magnet,hysteresis may occur. It is included backlash if it is the potentiometers with gears. 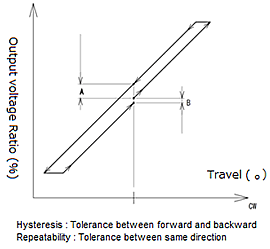 The degree of dispersion which obtained from the result of repeated measurement for a short time by same measuring procedure, person, system condition and location. It is different from hysteresis, it is the error of once back to full angle/stroke and restarted. 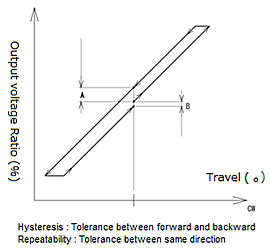 Temperature Range when the potentiometer is stored.

In order to estimate the durability of the potentiometer, it is usually indicated as the number of times which output does not exceed the specified life time by sliding in the no-load state. The performance of potentiometer which is in normal use appears in noise generation, linearity deterioration, resistance value change, increasing rotational torque, etc. In room temperature and humidity, with rotate speed 60~400rpm, it is expressed in the number of cycle until reaching even only one condition.

Life time end may be shorter by vibration, dither, harsh temperature condition and out-gas, etc.
In addition, since the actual life cycle is affected by the circuit condition of the load and environmental complex elemental conditions (temperature change, vibration, load on the shaft, etc.), it is a guide to use.

It is tested under specified conditions (acceleration, frequency, time, direction) and judge whether output is within the specification. During testing, shaft rotation is not allowed. Therefore it does not mean that the unit can be continuously used under test condition.

It is tested under specified conditions (acceleration, time, number of times, direction) and judge whether output is within the specification. Therefore it does not mean that the unit can be continuously used under test condition.

6ESD (Case to each terminal)

It is electrostatic durability in the condition of use after installation and it is resistance to leakage through the internal circuit due to the external static electricity contacting the potentiometer.
However, since it is resistance to the number of times specified by the test standards, the potentiometer must be taken care of away from static electricity.
In addition, test is done in contact with the metal part (shaft etc.) closest to the element on each product structure. Air discharge test is not done.

7ESD (Between Each Terminal)

It is electrostatic durability through the connection terminals and leadwires of the potentiometer which generated during installation and handling.
However, since it is resistance to the number of times specified by the test standards, the potentiometer must be taken care of static electricity during installation and handling.

Output of a contactless potentiometer using a magnet would be affected by the magnetic flux density change from outside factors (magnetic field leakage from a solenoid, a motor, other magnets, a large current power line or a magnetic substance).

It is the resistance value between terminal 1 and terminal 3.

It is the error range of total resistance value.

It is the minimum tilt angle that can be read as output in terms of tilt angle resolution.
In addition, Tilt sensitivity of MIDORI’s tilt angle type includes hysteresis.

Electronical output change is measured for each specified minute area over the effective electrical travel. It is expressed as a percentage of the input voltage.
It is the smoothness of the output. It depends on the smoothness and uniformity of the resistive element surface.
The output voltage sharply changes as this value increases, and output become more unstable as the variation range increases.

The part where the output voltage is not changed by making the resistance value 0ohm of the potentiometer.
The intermediate tap (B tap) for voltage application has a shorted segment of about 1~5°at the terminal part.
The contactless potentiometer is refferd as a clamp.

It is the defined position which is related to output voltage ratio. MIDORI expresses angle 0°.

Resistance caused by contact of sliding wiper, slip-ring or collector spring because of contact type potentiometer. When abrasion powder and foreign debris exist, the resistance becomes instantaneously high, which may affect the noise to the output.

For minimize Emax, Load impedance of the potentiometer (load resistance) be as high as possible.

Specify intentional misalignment of multiple outputs.
Normally 2 gangs contact type potentiometer is same output phase, 50% output position is matched as the index point.
In addition, the 180°phase is obtained by shifting the start position of the outputs OUT1 and OUT2 180°.

The difference between the outputs of OUT1 and OUT2 as the same mechanical angle, or the error with respect to the reference value of sum, for 2 output type. When using it as a fail-safe or self –diagnostic, two outputs are monitored by the ECU at all times and error diagnosis is made when a remarkable difference occurs. This value is clarifying error of each unit.

It is the part where the output of the contactless potentiometer becomes stable (unchanged), and it is set to the upper limit side and the lower limit side outside of the effective electrical travel.

If the time contact “T” is known from the above equation, the time “t” at wchin the output change “E” is reached can be calculated by the following equation.

Influence of torsion angle of mounting on tilting direction in tilt angle type. 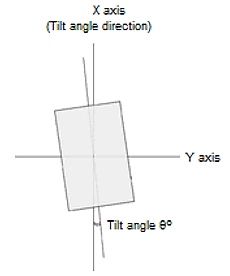 Influence on the output of the X axis when tilting the Y axis with respect to the tilt angle direction X. 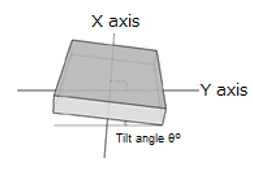 How much the output voltage is delayed with respect to mechanical movement is expressed by rotational speed etc.
If it is a return-spring type, it includes the influence of the followability of the spring. Hall-IC type has influence of calculation speed of Hall IC.

It is the fine hunting motion which is transmitted in the direction of rotation of shaft due to continuous vibration and resonance phenomenon on the instrument, backlash of the gears or rocking of the actuator, etc. may have a big influence on the durability of contact type potentiometers.

It is the specification of the serial communication’s physical layer. For examples, they are RS-232C, RS-422 and RS-485, etc.

It is the format of serial communication. For examples, SSI, SPI and ASI etc.

A method of outputting a pulse from a slave regardless of the operation of the master in communication between the master (such as a controller) and the slave (such as an encoder).

In the communication between the master (controller etc.) and the slave (encoder etc.), a method in which the slave outputs pulses in synchronization with the clock from the master.

Period to calculate and determine the position data inside the encoder. This is different from the cycle of outputting data on the serial interface.

It is a type of error detection code and is often used mainly for detection of accidental errors caused by data transfer. On the transmitting side, calculations similar to one kind of division are performed on the basis of the input data string, and the remainder is added as a checking value before transmission. On the receiving side, the same calculation is performed based on the received data, and the result is compared with the value for checking to judge the presence or absence of data corruption.